Magic and Miracles is in the 3rd draft phase. I've been cutting and pasting sections and editing them for content and form as I go along. I've added two new scenes as well that give better introductions to two of the protagonists. The current word count for this draft is 12,683.
Posted by Unknown at 12:17 AM No comments:

It has been too long since I used this blog. As I'm in the process of writing a couple of books to increase my writing skill I thought I would use this as a place to update my progress.

Project 1: Magic and Miracles
I have written this book twice for NANOWRIMO, both being different versions of the same story. My problem was that I lacked a strong antagonist and a decent ending. I've reworked it again and am about 6,000 words into the first chapters.
The basic plot is that two women of different faiths find that they have been given the mythical powers of that faith to fight an ancient evil.

Project 2: Superhero Medic Story
I've had this story rattling around in my head for years and finally decided to commit it to paper for NANOWRIMO this year. It is fully outlined and ready to write on November 1.
A young man in a world of superheroes gains the power to heal. He must face off with the government and a church that alternately wants to destroy him as the anti-Christ or adore him as a modern prophet. As the world crashes down his door in an attempt to get healed he must find a way to meet his own goals and somehow survive.
Posted by Unknown at 4:35 PM No comments:

Playing with the Art Style

My last post I talked about working on my overall style as a first step toward getting back to the webcomic world.  I took page 1 and colored it in several different ways.  Each has their strengths and weaknesses.  I wanted to put them all side-by-side and see what they look like.  The house is supposed to be old with the last paint job coming in the 1980s.  The colors are supposed to be a bit odd and will be part of the plot.

Coloring is one of the skills I'm weakest at.  Tell me what you think.  What elements of each do you like and not like?  I'm good with constructive critique.  If I did a webcomic, which should I use? 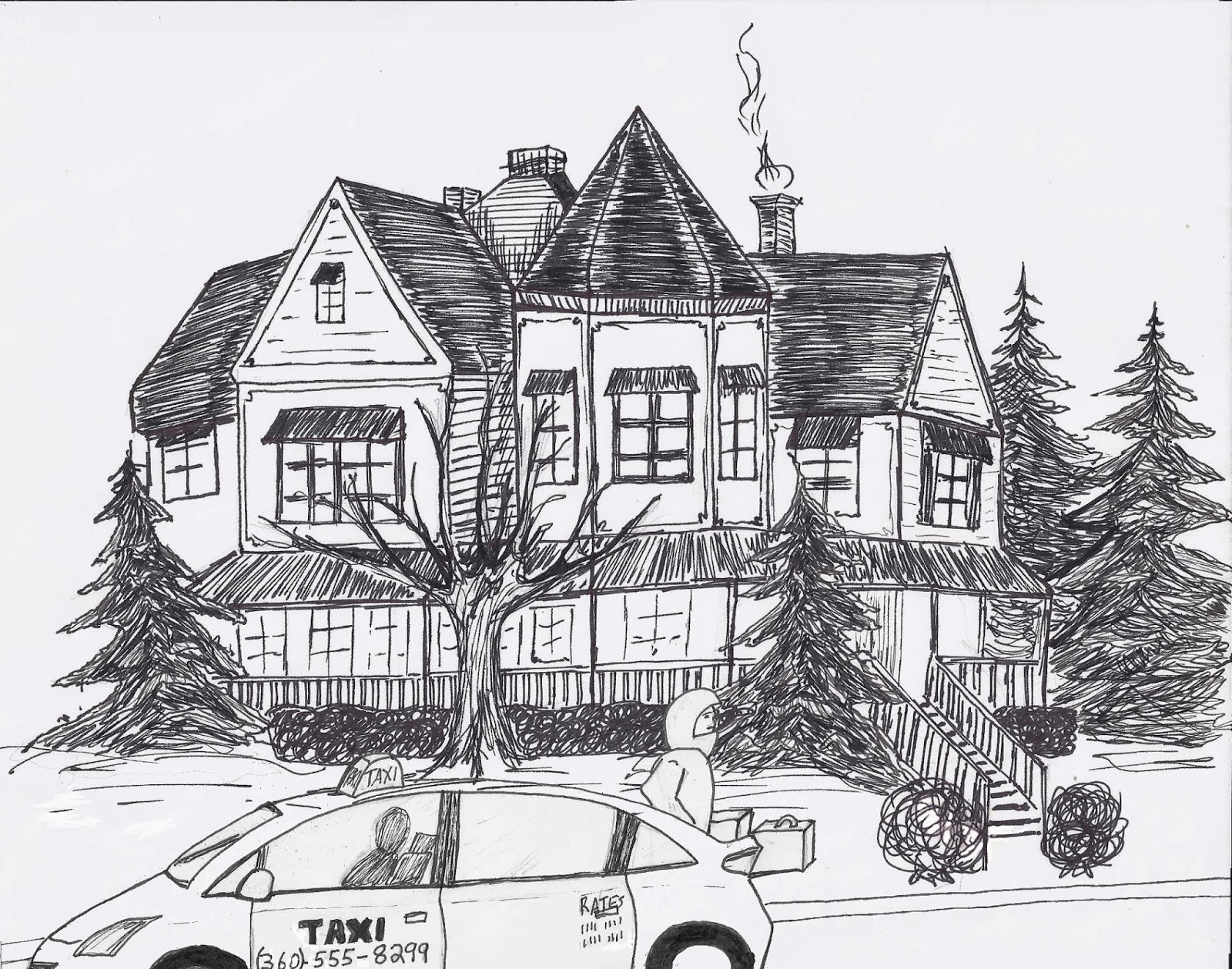 This is the original black and white line work drawn with a pencil and black ink pens. 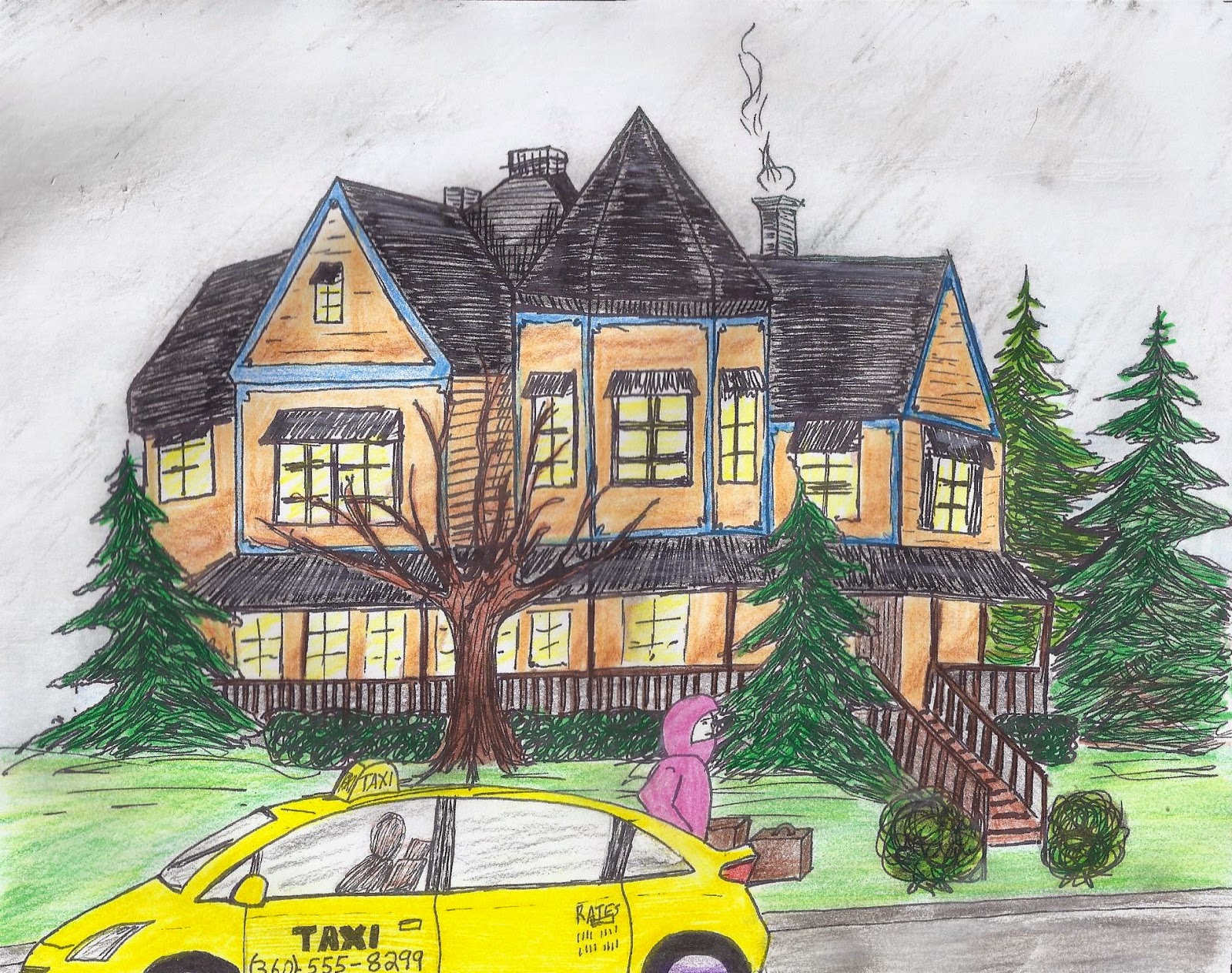 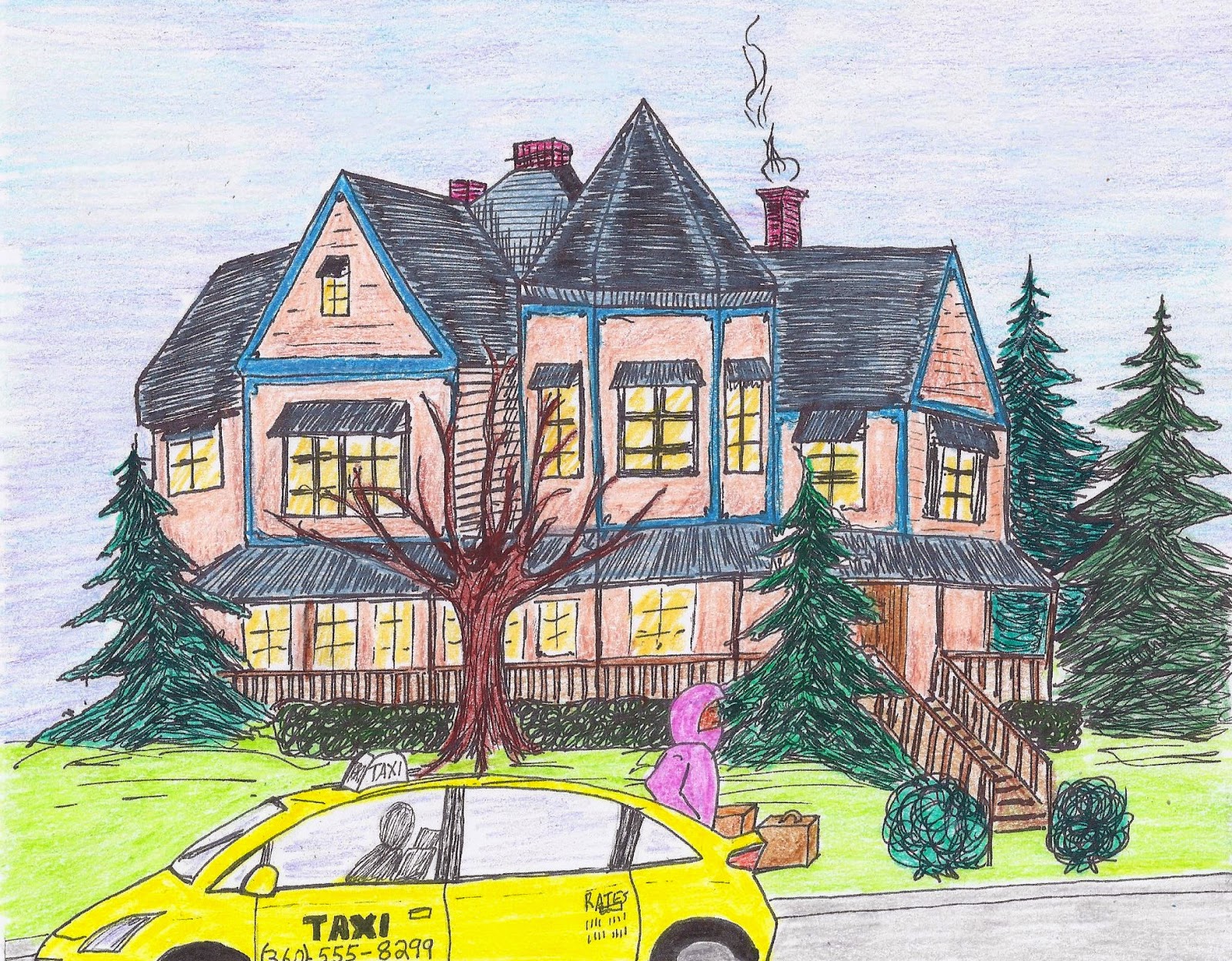 I did one with crayon on a whim. 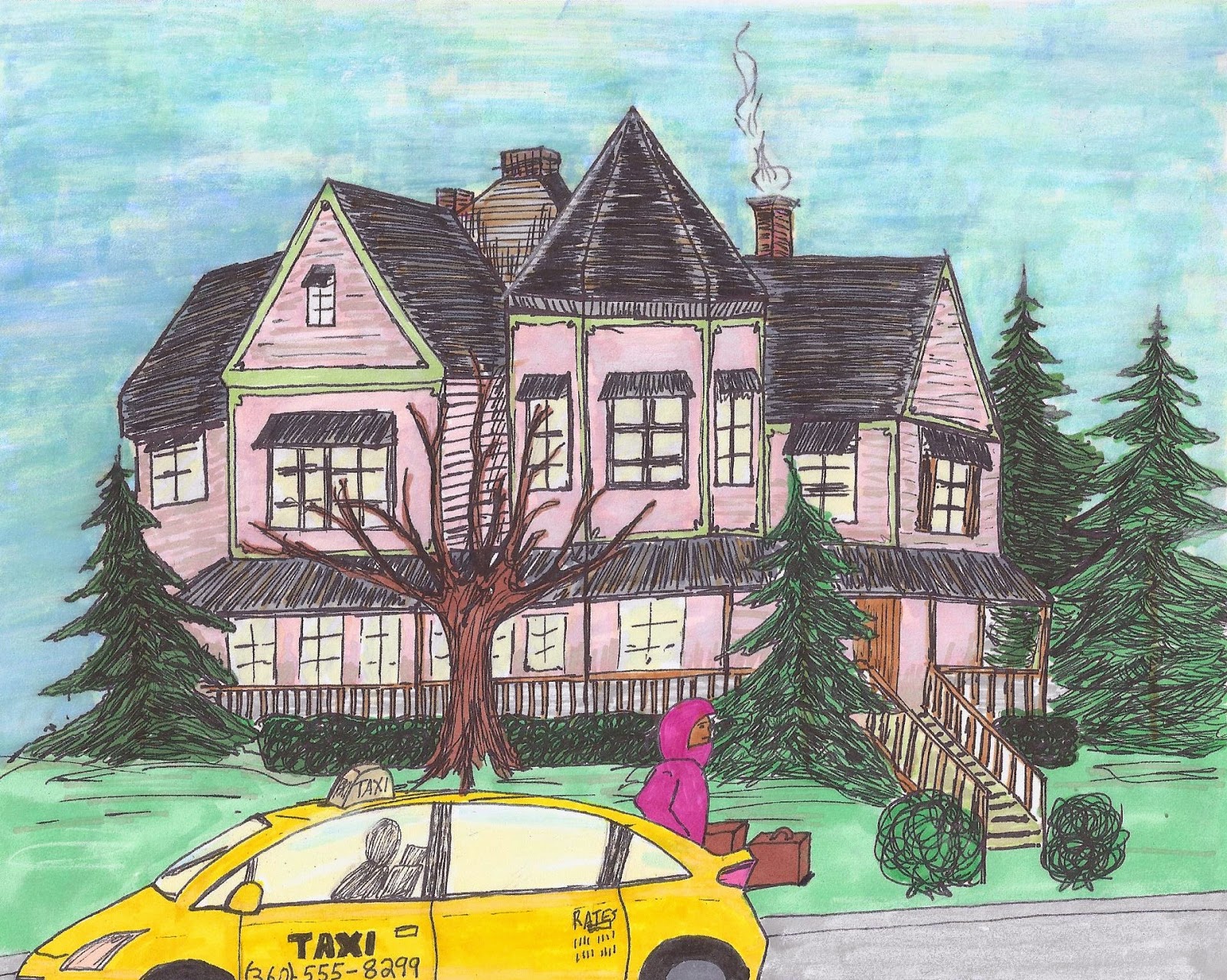 This one was made with Prismacolor markers 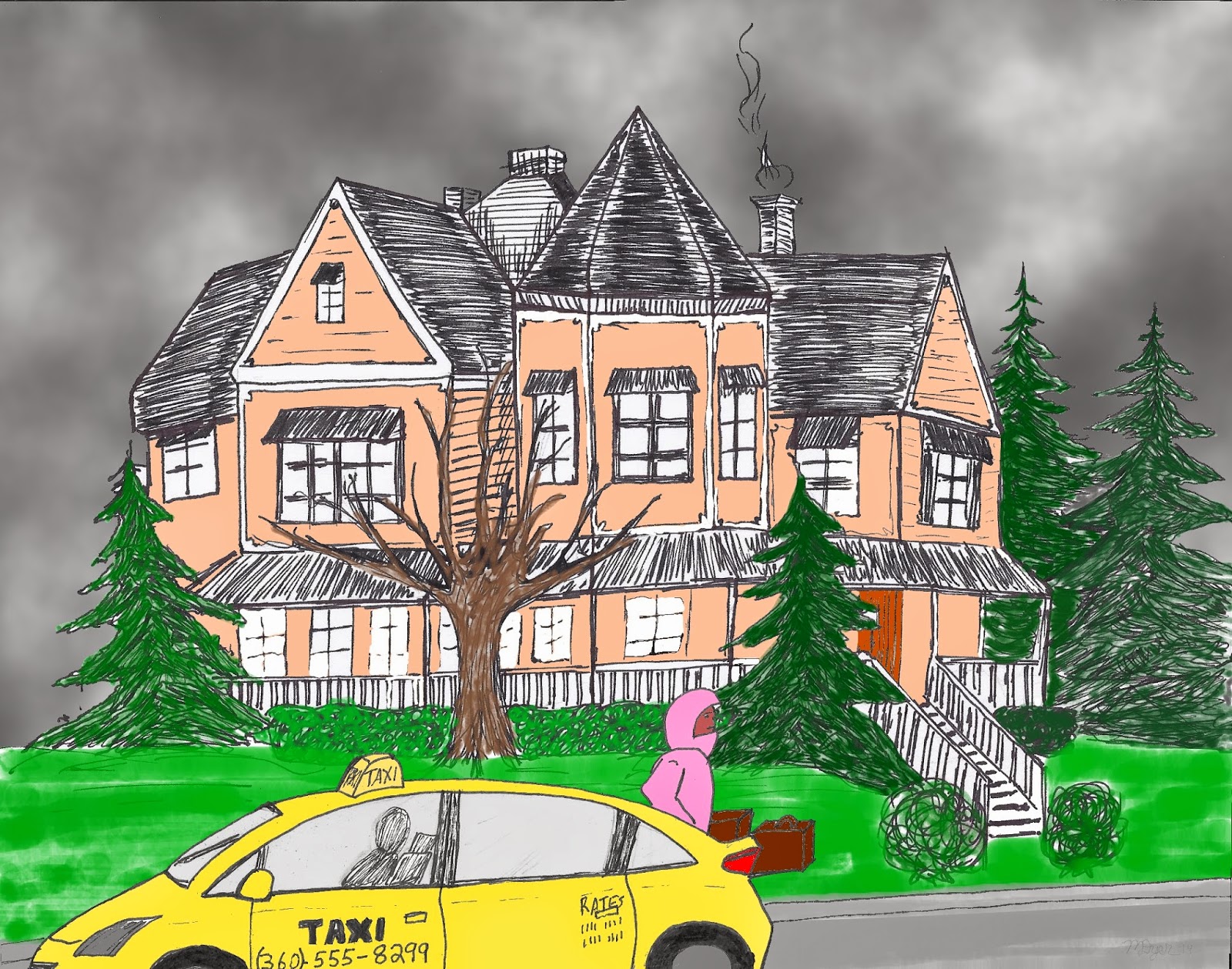 This last one I colored in Paint.net

All art created and copyright by Michael Dyer 2014.  Permission to share is not granted.
Posted by Unknown at 11:06 PM No comments:

Many of you may not know but there was a time I was a webcartoonist.  I published about 90 strips of "Heroes of Audio Land," a silly superhero comic, 56 pages of  "Action Figure Cinema," and a couple dozen of "Blackberry House" and "Magic and Miracles." 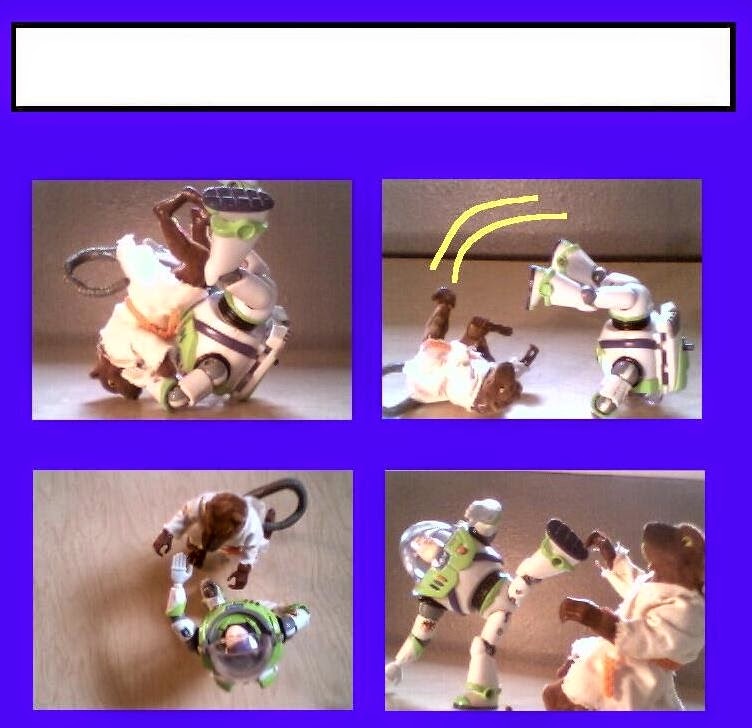 I've had a few stories floating around in my head for years and I've decided to explore making a new comic.

To do this I will need to figure out the art style.  I'm usually a pretty lazy artist and I would like to use this as a way to expand my artistic skill.

This is the drawing I have been working on for the first page.  The ink layer is basically done.  It was originally drawn to be shown in black and white but have been playing around with the color.  I digitally colored it last night.  Today I'm going to color it twice more.  Once with Prismacolor markers and once with high quality watercolor pencils.  Once they are all done I will scan all of them side by side and see what you all think. Posted by Unknown at 1:47 PM No comments:

I'm a fan of reality competition TV.  I love Survivor and other shows similar to it.  So I thought Opposite Worlds would be cool.  Two teams, one in a house with all the modern luxuries and the other in a cave with almost nothing struggle to win challenges for $100K.  The show's premise was good but they did so much wrong.

1.  The host talks constantly.  There are so many buzzwords and show specific jargon that he spends a lot of time trying to tell what is going on.  When there is a challenge and he is doing the play-by-play there is almost no excitement.  The live TV aspect also leaves him forgetting lines, stuttering, and losing his place quite often.  I have no doubt that Jeff Probst has his moments on Survivor but at least they are edited out.

I was not a fan of his when he hosted Capture for the same reasons.

2.  Frank.  They guy is fun and I'm sure I would want to hang out with him.  Putting one person in the game that is so physically dominating that no one else can even compete with him is poor casting.  The audience needs to believe that anyone has a chance but Frank dragged his teams to victory over and over again largely because the show relied so heavily on physical challenges.

3.  The challenges were overwhelmingly physical.  There were a few puzzles and communications parts but by and large it was all about the brawn.  When it got time for the semi-finals to reduce the players to two they brought in a trivia challenge.  I don't mind that at all, but instead of players racing to get a certain number correct there were only 6 questions.  Whoever had the highest score would win.  The last question didn't even matter.  Better would be to give a target number and then someone who is behind could fight their way back into it.

4.  The rules changed a lot. As a viewer I like to know what is going on.  A challenge, a decider, a protected (oh the jargon) and two people competing to stay in it.  Great.  But then one team has too many members so we balance the teams by switching one.  Then we have a team just vote someone out of the game like it was Survivor.  Then the quarter-finalists pick who they want to go into the semi-finalists with.  Have one system and stick with it.

5.  So Frank wins.  Hurrah and all that.  He stands up on top to give his victory cheer (roar?) and the fireworks go off.  They are so bright the camera literally can't see him any more.  On top of that they panned way out so we saw the tower he was on but not him.  The host droned on unemotionally about the victor.  Bad.

I can't imagine this show being renewed.  If it is, I hope that they figure out some formula to make it fair and interesting.  A new host, consistent rules, and more balance in players and challenges would help.
Posted by Unknown at 2:06 PM No comments:

I am very active in my Cub Scout Pack.  I am the Bear Den Leader (Grade 3).  I am Membership Chairman and Pack Trainer and Scout Parent Liaison.  I've also been chipping in on the Treasurer duties.  I have enjoyed doing all of these jobs.  A healthy Pack Committee spreads the duties around so one person doesn't become overwhelmed.  Right now I'm overwhelmed.

My term as Membership Chairman ends after tomorrow night.  I'm not a big fan of paperwork and there is a bunch of it.  Filing our charter has been a challenge this year with lots of technical issues and things popping up only after I had irreversibly closed the Charter paperwork.  Tomorrow night I turn everything in at the Tillikum District meeting.  I currently don't have a volunteer to take my place.  The job is not hard for most of the year and only challenging in November if you aren't already overwhelmed with other jobs. My term as Pack Trainer also ends tomorrow night.  This is a very easy job all year with a ton of nagging, pleading and begging for leaders to get their training complete in time for Charter paperwork to be turned in.  I am less than 24 hours away from having to finalize them and I'm still waiting for people to take their online classes.  I have someone to take this job from me.

The Scout Parent Liaison is mostly because I make myself the most visible (some might say obnoxious) member of the Pack. Everyone knows me.  Not hard.  I keep this one by default.

Treasurer duties are technically over.  My wife has been the Treasurer for the last year but work overwhelmed her and I took over balancing the checkbook.  Good news!  It balances!  The new Treasurer is in the process of taking it over.

In January I will be teaching two classes at the University of Scouting.  Both are about using songs and music.  One is for Cub Scouts and the other is for Boy Scouts/Varsity/Venturing.

I have also taken the helm of the Silver Lake Day Camp next summer.  There will be hundreds of hours of work involved in THAT one.  It should be a ton of fun though!

Posted by Unknown at 9:52 PM No comments:

New Drawings, Getting Organized, and Catching Up

It has been a long, tiring summer so packed with activity that I've let the house fall apart a bit.  I'm putting the pieces back together now that the busy levels have gone down somewhat.  The house is getting cleaned room by room.  Paperwork is being organized.  Even my stamp collection is finally getting into its album.

I have a few weeks with little Cub Scout responsibility beyond the norm so I'm taking this time to make sure the pack records are all up to date and setting in place systems so that I can give the Membership Chairman job to someone else.

I've also been invited to teach at the University of Scouting/Program and Training Conference in January.  My Wood Badge patrol did an awesome presentation about recruitment and I would love to work with them to expand it and teach it to a different audience.  It has also been heavily suggested that I teach a class about using music in Cub Scouts since I'm most often known outside my own pack as the music guy.  Not bad for someone who can't play an instrument and can barely carry a tune.

My art is progressing rather well.  I've been doing a lot of work with ballpoint pens and am thrilled that things are coming out so well.  I started out with that media oh so many years ago and am returning to it.

I've also been participating in a weekly figure drawing workshop at Arts Umbrella in Bothell with live nude models.  I think this, more than anything, has propelled my art forward.  I've done a lot of artistic nude and a few erotic artist trading cards but drawing from life while surrounded by amazing artists to draw inspiration from has been invaluable.  In order to keep them off my blog where kids and the morally outraged can see them I have put all of my NSFW drawings on their own tumblr.  Please take a gander if you like.    Comments are welcome.  http://brassduckstudio.tumblr.com/

Here are some of the other drawings I've been working on. 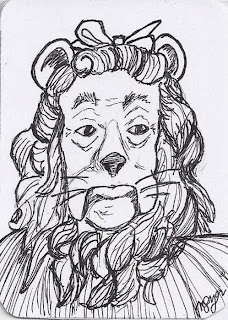 I love the Cowardly Lion 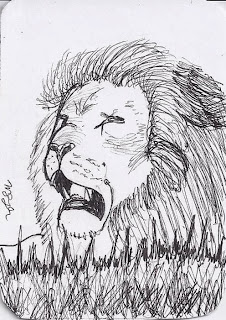 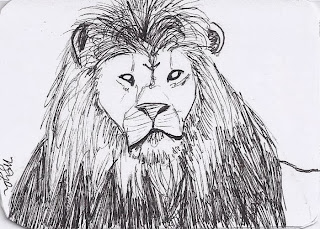 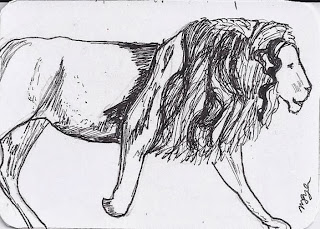 The following cards were made to represent the 7 Wood Badge Patrols at my recent course. 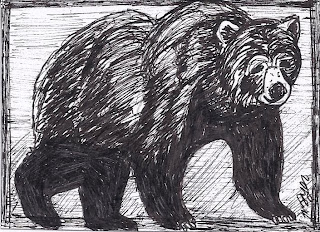 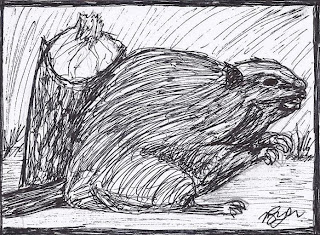 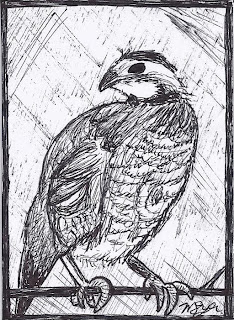 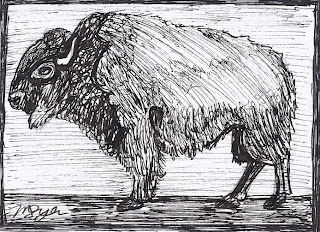 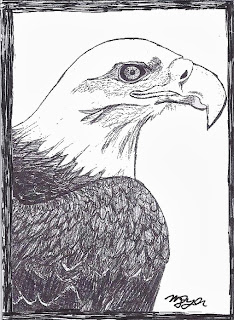 Eagle.  The drawing is older but is one of my favorites and I shrank it to ATC size as a print. 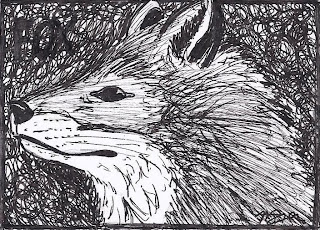 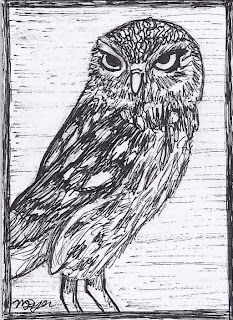 Posted by Unknown at 7:40 PM No comments: